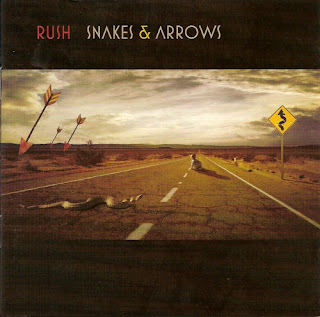 Quietly, year by year, the power trio Rush has logged in a track record for longevity that is matched by few rock groups. Judging by the CD Snakes and Arrows (Anthem), released last year, they show no signs of diminishing creativity.

The songs have strength, the instrumental togetherness remains intact, and vocals are what you expect. If you already like them, this will not disappoint. I’ll admit I’ve ignored them for years. Now I think that might have been a mistake. If you like wall of sound rock with some melodic content that does not muck around in banality, this CD might be for you. Don't forget to vote tomorrow. [Ed note: Well, that was the case. Obama was elected, duh.]
Posted by Grego Applegate Edwards at 6:42 AM