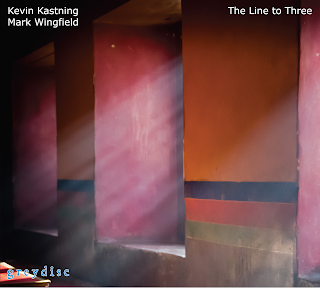 Well, buckle up your seat belt because The Line to Three (Greydisc 3533) takes you on a journey into deep space. It is a further collaboration between Kevin Kastning on 30-string contra-alto guitar, 15-string extended classical guitar, piano and percussion, and Mark Wingfield on electric guitar, live electronics and pre-recorded soundscapes.

This as you can imagine is post-psychedelic guitar art that in my head extends what Terje Rypdal forged for us--a new music psychedelia if you will--and takes it in very original and further outward directions.

The guitar work from the two is exceptional, beautifully extended guitar-as-art expansions into dramatically chromatic fields well supported by piano and soundscapes.

It is fabulous music! I wish I had made it, that is how germinal-internal it is for me.

I most heartily recommend it to you. Turn it on and tune it in!
Posted by Grego Applegate Edwards at 6:50 AM No comments: 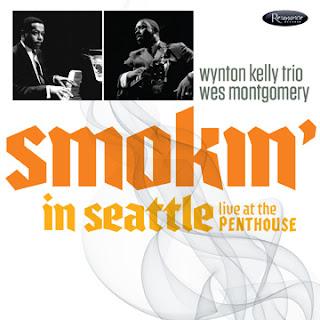 To my mind any live Wes Montgomery that exists in decent sound and has not been circulated commercially until now is a release event of importance. So when Smokin' in Seattle, Live at the Penthouse (Resonance 2029) arrived in my mailbox a while back I was tingling in anticipation. The music, quite well recorded, comes from a couple of radio broadcasts from April 1966.

It is a worthy addition to what we have heard from the excellent collaboration of Wes on guitar and the Wynton Kelly Trio, which of course set the pace with two excellent albums, Smokin' at the Half Note and Full House. On this new release Wynton Kelly has bassist Ron Mcclure on board as well as Jimmy Cobb in the drum chair.

They as you would totally expect swing and smoke with authority for the date. Half of the numbers feature the trio alone, presumably as a warm up. These cuts do not detract from the whole, since of course Wynton was on top of the world then. The remaining cuts bring in Wes. And oh, what a great thing it is to hear more of him in a concentrated live jazz setting.

He is in terrific form, as is Wynton and the trio.

We lost so much when we lost Wes so early. But this music reminds us that we did not lose everything when he took his leave, because of course he left us his recorded output. This fills it in with some spectacular soloing. Do not miss it!
Posted by Grego Applegate Edwards at 6:21 AM No comments: