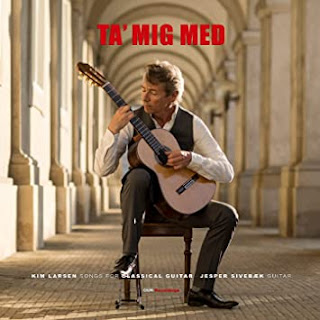 Danish Classical label OUR Recordings celebrated its 15th anniversary last year. I've covered happily a number of their records on my blogs and now to celebrate that anniversary I am happy to talk about one especially vital for guitar aficionados and players alike. It is an album of songs for classical guitar as composed by Kim Larsen and nicely performed by Jesper Sivebaek, the latter a very fine artist who is the head of the guitar department at the Royal Danish Academy of Music in Copenhagen. The album is entitled Ta' Mig Med (OUR Recordings 8.226915). In English that translates as "Take Me Along." It is from the Larsen song "Joanna" which appears on the album.

There are twelve instrumentally elaborate and lyrical guitar parts involved in making the songs come alive. The written impetus of Larsen has a near ideal performer-interpreter in Sivebaek. The music is songful in its overall feel and discrete parts with song standard sorts of sequences. The music is lyrically tonal with guitar technique nicely put together out of folk and classical fingering-picking patterns. Needless to say there is a knack for putting all that together and at the same time creating inventive sequences that charm and feel right in all their elements.

From a samba feel to country picking there is a kind of great synthesis of acoustic guitar style-technique from our time. So in this we have a thoroughly smart synthesis and yet in the end it is a lyric originality that pleases and stays with you in the happy ways all good music should. I give this one a strong recommendation and hope it will light up many faces with smiles. Bravo!

Posted by Grego Applegate Edwards at 8:03 AM No comments: