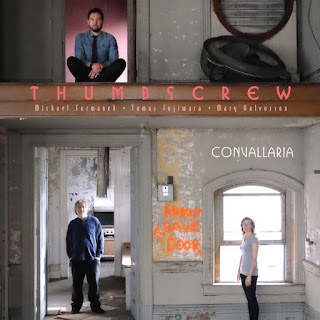 Was there ever a time when people could know the future with certainty? At best humans projected the present outwards and assumed things would continue to move along the same lines or continue the same (deceptive) stasis. My childhood happened at a time when the US had a somewhat arrogant assurance that we were on the eve of permanently occupying outer space, as '50s people with zits, crew cuts and stupid glasses yet with metallic suits on. Futurism was at a height and the future music we imagined was created in advance by an avant garde, Sun Ra, Stockhausen, Varese, Mingus. We were definitely headed OUT THERE.

If we collectively never quite made it, the space music-of-the-future never quite died out, thankfully. Right now, if you look hard enough, there are numerous recordings of what might have been seen as space-age years ago. Now, it is just the music of the present. The world of jazz is well represented in this sphere. And some of that is very electric, some of it is slightly electric. Thumbscrew is in the latter category. It is a trio of electric guitarist Mary Halvorson, bassist Michael Formanek, and drummer Tomas Fujiwara. The album is called Convallaria (Cuneiform). I believe it is their second as a unit. (See my index search box above for a review of the first album.)

The purely improvisational outlooks of these three musicians are masterful and unparalleled. The compositional weightiness of the program on this album has an equal importance, so that we get a sort of spacey free jazz rockiness that covers some of the unexplored interstices between the genres that is perfectly right for Thumbscrew's musico-collective personality.

Mary is much more than the sum of her occasional effects boxes use. She is alway intelligent and in forward motion, a free guitarist's guitarist. Michael is as ever an extraordinarily creative bassist and plays a huge roll in the success of the trio. Tomas busily and importantly occupies some profound drumming space.

In short this is important music that extends the contemporary rock-free jazz ground outward in greatly rewarding ways.
Posted by Grego Applegate Edwards at 6:37 AM No comments: 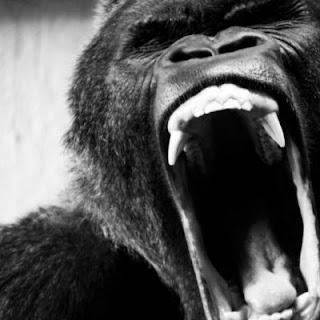 Ape Shifter (Maximum Booking/Brainstorm Records BS0401639) is the brainchild of guitarist Jeff Aug, who wrote the 11 catchy instrumentals on the record. He is joined in a worthy power trio configuration by Kurty Munch on drums and Florian Walter on bass. It looks like this band is based in Germany.

This is hard-rock quasi-metal that gives a nod to the rootedness of the music--Zep and such. And the more contemporary influence of things like Van Halen. Jeff plays a very solid power-chord centered guitar. Kurty and Florian come through with the heft that is needed.

It is a thorough hoot. Well played. If you like a good power trio that can and does crank it, here you go!

Posted by Grego Applegate Edwards at 6:38 AM No comments: