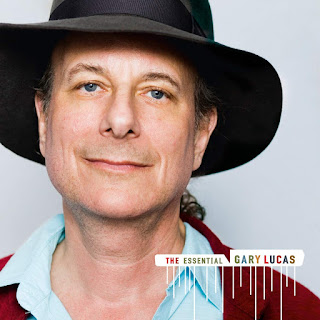 A major guitarist and musical artist of the caliber of Gary Lucas is one of those brilliant rareties one misses at one's own peril. He has created a body of recordings no serious student of the instrument should miss. But then of course his art can and does speak to those who do not necessarily play guitar, for those seeking pioneering and exciting sounds as a whole.
There is so much that's worthwhile to hear in the Lucas discography that those new to it face a daunting task--to sort through the whole of it is very worthwhile but of course it takes some doing. Enter just now a two-CD best of compilation that gives you a succinct overview of where he's been, The Essential Gary Lucas (Rarelum  018-2 2-CD).

The challenge with somebody as diverse and inventive as Gary over the years is what to leave out more than what to include, because there are an awful lot of essential aspects. So there of course is the extraordinary guitar artistry--the original and rather amazing fingerpicking on acoustic or electric, there is the striking slide work, the execution of intricate patterns, the shredding electricity in a band context, or all combined in a solo digital delay sequence. And then one must not forget the rhythmically lively pattern of strums and picking articulations that compliment collaborations with particular vocalists, often enough involving a special niche of the world revisited and rethought. Then there is the song wielding songwriting especially with Gods and Monsters, the pathbreaking collaborations that stretch music boundaries, the beautiful work with Jeff Buckley, the adoption of classical gems to solo guitar, solo guitar music for movies,  the Captain Beefhartian adventures, and countless other features and subtleties one catches on lingering listens.

For those that appreciate the Bockley-Lucas song collaborations, there is the wonderful Dutch symphonic-guitar-vocal version of the Buckley-Lucas song "Story without Words." It's inclusion alone n enough to make the whole set worthwhile, but of course there is so much more, too much really to enumerate minute-by-minute in this space.

If you are guitar happy and/or a fan of the advanced out there this makes for a valuable  single-source introduction or confirmation to the thoughtful artistry of the master. He has the sort of originality that a mere note or two from him serves to remind you that his sound(s) are one-of-a-kind.

Some of the additional rarities may help you decide to get this--The "Music for the 'Golem'" sequence live from 1989, "All Along the Watchtower" for Gary and vocalist Feifei Yang, the live guitar Beefheart "Flavor Bud Living." All that is great to have but then the whole set stands out after a while. A major living guitarist presents some hand-picked best. What more could you ask for? Get it.

You might well find after hearing this a bunch of times that you will want more Gary Lucas in your ears. That is partly the point, but even so this is one helluva listen! Grab it!

Posted by Grego Applegate Edwards at 10:18 AM No comments: 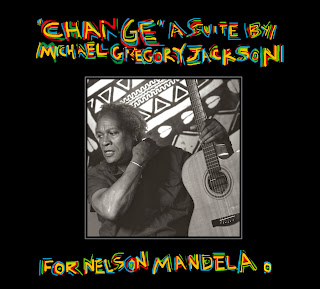 If there is a constant in the world today, it is uncertainty. Or that is one constant. And for me it is also the artistry of Michael Gregory Jackson, guitarist, vocalist, composer, bandleader. He one of the musicians I have listened to and appreciated for a long while. The constant is that I am likely to appreciate anything he does.

So a while ago he released one that actually goes back to 1994 but is worth waiting for. It is Change, A Suite for Nelson Mandela (Golden Records, Bandcamp DL). It is a 20-minute work for Jackson on guitar and vocals, his sextet and three background vocalists. That includes Stephen Haynes on trumpet and Chuck Langford on saxophone.

One thing about Michael is his ready, exceptional combination of drive and lyricism. That is very true of this one--the melodic line is not something you'll forget. It's a wonder of a tribute to Mandela. And it is Fusionoid in nice ways and gives us drivingly tight ensemble, wonderful lead vocals and some excellent guitar.

It is 20 very necessary minutes. You should check it out!

Posted by Grego Applegate Edwards at 6:33 AM No comments: