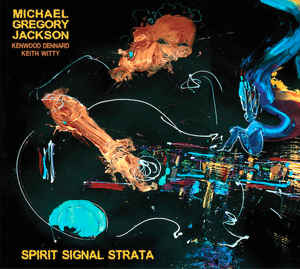 If I say right out that Michael Gregory Jackson has over his career consistently distinguished himself as one of the very most distinctive and convincing guitarists in the modern jazz-fusion-post-new-thing zone, I say it to let you know where I stand. There are a number of factors that set him apart. One: Michael's music is at once the sound of joy and poetic exploration. There is exuberance, a special lyricism, a brilliantly melodic flow to his playing. Two: His music as he himself acknowledges, is a product of ALL the music he heard growing up--so jazz, rock, soul, and other things besides. Three: the factors above play into the music he makes for a performative beauty and luminance no other electric guitarist quite has out there today. Five: there is freedom to his music, at the same time as there is structure and pacing.

So all of that is readily heard on his latest and one of his very best albums, Spirit Signal Strata (Golden MGJSSS-01). For this outing Michael joins forces with a potent and open post-power trio. Kenwood Dennard is at the drums, a free-ranging and powerful exponent that brings the music ever forward. He is joined by the woody smarts contrabass of Keith Witty, who straddles the terrain between rhythm team functions and harmonic-melodic second lining quite effectively.

The program is a gradual outward traversal, beginning close to earth with some rootsy blues-rock-improv-jazz spans and then brings that further afield into spacier, more free spaces that include the roots but pull and stretch them to higher reaches of music.

The especially rewarding thing to center on is Michael's brilliant lining excursions, some of the very best from a guitarist that I have heard in years. He can keep a solid grounding in rootforms but still create a very idiomatically personal zone of drive and lyricism. On the free-er numbers he unleashes his more upward imaginative powers and creates a flow of musical lines that marks him the principal exponent in a school of one! The drenched drive of the guitar tone gives Michael's musical aura power and heft. The intelligence and soulfulness of his plectrum wielding and tone choice make it all work as a self-in-sound that gives Fusion a renewed vibrance and viability.

Is that clear? What I want you to do is get this album now, if you can. You who want to keep hip on the present-day scene need this album to throw you into the very much actuel. Michael remains and becomes ever more central! So listen.

Posted by Grego Applegate Edwards at 7:00 AM No comments: