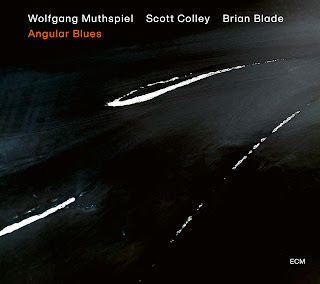 I have had the pleasure of covering Austrian guitarist Wolfgang Muthspiel on these pages (see June 30, 2014, December 13, 2013 articles). There is a new one and it builds on his legacy in the best ways. It's a trio date entitled Angular Blues (ECM 1655).

There is a beautiful three-way dialogue throughout that highlights a very simpatico rapport between Muthspiel, on acoustic for the first three tracks and electric for the rest, the always swinging and subtle Brian Blade on drums, and bassist Scott Colley turning in some of his best playing on disk.

For this, Muthspiel's fourth album as leader on ECM, there is a very appealing mix of well constructed originals and a couple of rather reassuringly fresh takes on old songbook items ("Everything I Love" and "I'll Remember April"), the latter of which are apparently the first standards Wolfgang has committed to wax as leader and fine blowing vehicles they are in the trio's hands.

With this freewheeling date that minds changes or motors through quasi-modal sequences with equal grace, Muthspiel gives notice that his consummate artistry excels with a ripening maturity rewarding to hear.

The three acoustic segments kick off the music with promise. "Wandering" gives Colley the lead melody and both he and Muthspiel get some open improv time that they do not let go by without good commentary and creative frisson. The title cut "Angular Blues" has full blooming abstraction in the head, some ravingly creative three-way interactions and a nice solo space for Blade. And so it goes, with promising openings followed up by well turned successions, all quite strong. Not the least is the final acoustic cut, the very lyrical anthem "Huttengriffe."

We must not neglect to mention the fully burning bop excellence of "Ride." It emits white hot flames and reassures us that the roots of the Jazz heritage continue to refresh and sustain with the patent originality and prowess of these three artists. Bravo!

The most electric and in its own way the most nicely freewheeling is "Kanon in 6/8" which allows Muthspiel to build elaborate multiple contrapuntal lines that Colley responds to beautifully well. The immediately following "Solo Kanon in 5/4" creates even more florid multi-Muthspiel voices that refresh with their extraordinary inventiveness. Both tracks are unforced and natural, super-musical and not the least gimmicky.

The concluding funk-laced "I'll Remember April" reminds us what Jarrett's Standards Trio might do with such things, only with Colley breaking into his own take solo-wise we end up heading toward a different destination. Wolfgang responds with a firmly swung solo of his own, a post-Abercrombie, post-Hall beauty of execution that sums it all up and then goes back to the funky pedal-pointed mantra that quite naturally gives Brian Blade space to comment on Wolfgag's lengthy exposition. It is a fitting end to a very worthwhile set.

After having lived with this music for a few weeks the album stands out to me as a testament to Muthspiel's full-blown artistry, his position among the foremost Jazz guitarists of the present-day. He has arrived, of that there is no doubt. Outstanding album this is. Do not miss it.
Posted by Grego Applegate Edwards at 7:39 AM 1 comment: 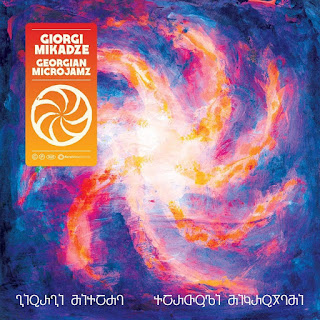 One more review day, and another way to play? Yes, today an unexpected surprise--that is an album by Giorgi Mikadze entitled Georgian Microjamz (RareNoise Records RN0116[CD] RNR116LP). It is a most unusual combination of Georgian (Eastern Europe) Folk elements and well articulated Fusion-Progressive-Jazz-Rock utilizing microtunings.

What is further remarkable about it is that it really all works together to create a distinct whole.The band comprises Giorgi Mikadze on microtuned keyboards, compositions and arrangements, David Fiuczynski on fretless electric guitar, Panagiotis Andreou on fretless electric bass, Sean Wright on drums, and traditional oriented Georgian vocals by a male group Ensemble Basiani (on three tracks) and singer Nana Valishvili (on one track).

The Georgian vocal element draws upon the ages-old polyphonic primality that has great beauty and distinctiveness. That Mikadze manages to make excellent use of the style and fits it into the microtonal electric fusion complex he so nicely fashions with his band is rather amazing. And despite or in addition to the elaborate compositional element and the finely improvised Rock-ish Fuzoid the band adopts a set of microtonal tunings that hang together organically. They make sense once one gets used to them.

The band is excellent with Berklee College of Music's David Fiuczynski taking full advantage of the microtonal possibilities of his fretless guitar for a fused exuberance that Giorgi seconds fluidly well on his keys. Panagiotis does a fine job with rock-solid anchorage that his fretless bass retunes in synch microtonally with the others. Drummer Wright has a busy and driving heat that pushes the music forward with musical intelligence and fire.

The compositions make lively and memorable musical discourse out of the microtones and set up the improvisations with a weighty context.

Georgian Microjamz has it all--innovative ways, true artistry, compositional clout and a convincing amalgamation of styles into an exceptional whole. Do not miss this one if you are open to the new. Highly recommended.

Posted by Grego Applegate Edwards at 5:21 AM No comments: