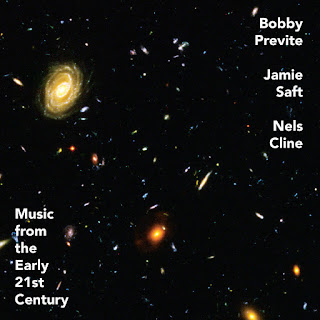 What pristine electric sounds were unfolding and evolving on the advanced Psychedelic Rock scene in the later '60s are still a touchstone, a foundation for the more futuristic "Progressive" electric music happening even today, most specifically in the Jazz-Rock nexus that keeps striving forward undaunted despite a world that sometimes seems to have gone otherwise astray.

If you need proof of that or even if not, even if you do not care what the flavor of the month might be, there is a recent release of value and significance. It is called (prophetically or otherwise) Music from the Early 21st Century (RareNoise Records  RNR0115[CD]. RNR115LP[Vinyl]).

The trio makes plenty of sense in terms of the backgrounds and interests of each player. The album consists of ten live improvisational Neo-Psychedelic excursions as recorded in four clubs in New York and Pennsylvania last spring. The instrumentation is Jamie Saft on Hammond Organ, Fender Rhodes and Mini-Moog, Nels Cline on electric guitar and effects, and Bobby Previte on drums.

The first thing I noticed in the first listen was how much Jamie Saft's Hammond sound and note choice had deep roots in the classic organ vibe of bands like Deep Purple, early Soft Machine and the Nice. The rootedness is heard more in essence than in imitation, for this entire album takes those roots and does something original, freewheeling, and advanced in terms of a collective improvisationality,

There are a wealth of inspired three-way inventions that imply a high level of technique (especially from Nels Cline) without being a chops showcase per se. And that is a sign of a mutual maturity of course, of musical, group inventional values being foremost as they should be. At the same time there is a high level of electricity--sustain, feedback, signal synthesis, tunnels and walls of sound. And of course that is only right, since this is a stylistic complex that traditionally thrives on signal transformations--and the trio extends that aesthetic in ways both tasteful and gutsy.

The levels attained by this trio are consistently very high. It is not easy to take up this style nowadays and carve original and valid niches into some futuristic opening but that is just what Previte, Saft and Cline do. There are a few select riffs and they move the music ahead but the exceptional level of freely collective invention is what sets this one apart as unusually inspired.

Anyone who looks for new ways to be both electric and free, you will no doubt be glad to savor this one. An essential. Perhaps indeed a future classic.

Posted by Grego Applegate Edwards at 10:19 AM No comments: