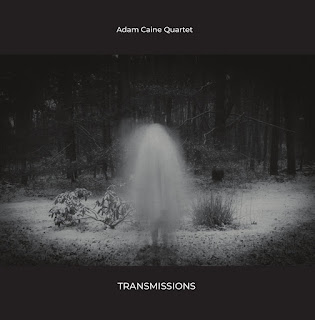 The electric guitar work of Adam Caine is something special. His importance continues. There is a new album out with a two-guitar quartet called Transmissions (No Business NBCD 126) and it is a winner. It is a set of compositional frameworks and solos, as opposed to the pure improvisation albums he has put out previously. What further distinguishes this music is the way they work out the Quartet format of two guitars--Adam and Bob Lanzetti plus Billy Mintz on drums, Adam Lane on acoustic bass--and Nick Lyons added on alto sax for one cut.
All of the numbers are Adam Caine compositions that stand on their own as inspired content at the same time as they provide good blowing vehicles. I run down pertinent aspects of all the pieces below.
"Night Driver" has a lyric two-guitar head melody that sounds vaguely Jerry Garcia-ish-meets-ECM but then in a B section a lovely contrasting chordal motif. Straight after it's off to the short solos including Adam Lane sounding very fresh.
"Cloud Over" has Elvin Jones-ish swing and a two-guitar head melody that meshes wonderfully well in bluesy lyricism. The guitar solos built over a loosely together propulsion sound a little post-Jerry again while they rock jazzishly. With second guitar comping very nicely the Caine guitar solos  to me in a very hip way. It all moves beyond in another sort of post-Dead fullness.
"Alien Flower" has a bit of noir atmospherics, an aesthetic pondering that feels a little black and white to me, in a good way of course.
"The Girl" has some especially nice lyrical guitar work, changes-based and elegant. It's a kind of poetics that has florid jazz-rock underpinnings, aspects that mesh together well.
"Secular Expectations" is another ravishing melodic headline with solo guitar work that surprises and brings big smiles--at least for me. Nick Lyons' guest alto fits right in and expands the solo spread meaningfully.
"The Core" has very electric jazz-rockish solos by the guitars--flat-out burning metal, with the rhythm section giving it lots of torque.
"Hell Awaits" very free electric with hot Lane bowed bass and Caine on electronics, then blazingly out metal guitar(s). The drums tumble freely. It segues into long sustain psych-guitar moments with bashing drums.
"Heavenly Bodies" has a very memorable two-guitar,  lyrical not-quite-riffing head, then space for an excellent solo moment for Lane on bass. After that we hear some nicely contrapuntal guitar with solo significance, A delicately spinning wonder this one is.
"The Spiral" has a rock-funk underpinning with some nice guitar riffing underneath Adam's very fuzzy and melodic solo, a gem.
This is as fine an electric outing as I've heard this year. It has a thoughtful air about it, and at the same time wails out with feeling when it needs to. A guitar joy, this is! I heartily recommend it.
Posted by Grego Applegate Edwards at 6:59 AM No comments: