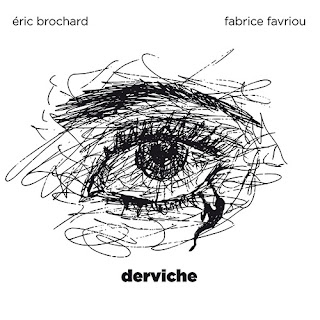 What comes next? Musically? The answer is everything that went before and some that didn't? In the world we live in right now, all awaits if we can but stay safe? Well at any rate the possibilities musically are as wide open as they have been, if you have persistence, courage, and you are willing to explore.

All that must serve as a prelude to a new disk this morning which is a sort of reaffirmation of the possibilities--of the sparse electricity of Psychedelic Trance Drone Avant Rock if you will. I speak of an album by Eric Brochard and Fabrice Favriou, on piccolo-bass and drums, respectively. It is entitled Derviche (Ayler Records AYLCD-165), which is appropriate because it does spin, whirl, go around. It is taking the bass and making it a bit more metal-guitar-like and then spawning a trance drone expansion of beat and sustained chord.

The five "Sequences" that make up the album move around as a wash of beat and drone, a bass chord sequence with plenty of bottom but some treble too, an unrelenting rock drum tattoo that has life and variation to it while never flagging.

"Sequence III" gives out with another droning motif and the electronic enhancement of the bass makes it sound as if there are organ tones in there as well.

The promo sheet that came with my copy of this CD describes the music aptly as "experimental rock, focusing on bareness as a research tool." The motive and repetitions aim to achieve an "ecstatic point," which is the case if you let it all sway you to an aural space it occupies resolutely and poetically.

The distorted metallics of droning and re-droning reinforces one's immersion in the aural space of the recording. It is the very opposite I suppose of the frenetic sheets-of-sound chordal barrages of late-50s Coltrane, and we can accept that as another way to occupy musical space without taking sides, surely not something worth choosing one over another to my mind, because indeed we need both.  It has its space and it does the drone barrage admirably well.

I recommend this one for its sheer sensual inter-planetificatory vibes. If you meet it half-way it will take you out to the edges of outer space, so to speak. Listen!

Posted by Grego Applegate Edwards at 10:01 AM No comments: 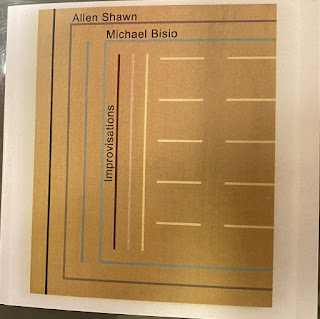 Anyone who has read this blog, the Gapplegate Music Review and my Cadence reviews from some years ago no doubt knows that I very much appreciate Michael Bisio's acoustic bass playing a great deal and consider him as among a handful of the very most accomplished and innovative Jazz-Improv bassists out there today. So I was very happy to be sent his latest CD outing with pianist-composer Allen Shawn.
Michael has been playing for the past several years in pianist Matthew Shipp's Trio, a state-of-the-art outfit if there ever was one. The current outing changes things up as a duo and with a different chemistry born of a different set of intersecting backgrounds. It all makes for an equally absorbing but essentially varying stylistic amalgam.
The album is aptly and matter-of-factly called Improvisations (self released). It is a wide-ranging series of seemingly mostly spontaneous improvisations of Michael and Allen Shawn, both of whom teach at Bennington, Michael bass and Allen composition. The fact that Allen composes orchestral-chamber-piano New Music is somewhat telling in how at times he structures his improvisations. Yet there is a deep internal referencing of the Jazz tradition to be heard, too, quite happily. The Shawn-Bisio intersection on the faculty at Bennington is musically quite fortunate as  you no doubt will realize when you listen to this first collaboration.

Some improvisations give us a song-like or a generally pre-structured way of going at it. Others have more pronounced improvisational freedom. The first improv makes me think of Mingus in the best ways. The final piece is mesmeric-cyclic and then a very attractive anthemic theme that reminds one of a Charlie Haden-Carla Bley evergreen in its own way.

Bisio sounds especially inspired by Shawn's open-ended presence, both harmonically-intervalically and melodically. And Shawn in turn seems to delight in the response he gets as it spurs him onward to dig ever more deeply for further musical insights.

It is a magical mix of bold ideas and intensive duo considerations. Anyone with an interest in "serious" music, duo interactions, improvised music, bass and piano performance excellence as it continues to thrive undaunted by the upheavals of recent events, this one is most definitely for you. Highly recommended. A marvel!

Posted by Grego Applegate Edwards at 7:43 AM No comments: