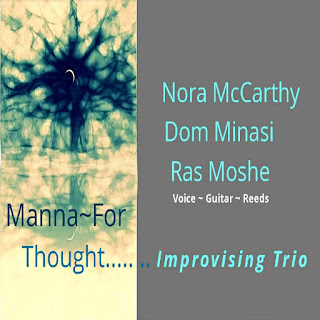 Whatever Dom Minasi has done in the last few decades has been ever at the pinnacle of improvisational creative freedom and, hey,  properly thought out, nothing is exactly "accidental!" And the latest is no exception. I refer to the album by the Improvising Trio of Nora McCarthy (vocals), Dom Minasi (guitar) and Ras Moshe (reeds). It is called Manna For Thought (MIC-ART) and in fact it most certainly is that!

At the same time there are compositional things going on too. All meshes together in ways where you do not feel a radical separation of planned and spontaneous note-ing, but instead a thoughtful and soulful gathering of three masters who make a very pointed effort to listen carefully to one another and create something worthwhile.

Ras Moshe sounds great here, relaxed, himself, open and note-ful, a blowing that is with a true self-sound, not some other-else-sound. He shines on this! Dom Minasi is a guitarist who never sounds like anybody but himself, too,  and at the same time invents lines and chording, timbral fingerprints that by now mark him as one of the most original and provocative guitarists active today. Poet-singer Nora McCarthy has the ability really to improvise and to do it well with a gorgeous voice and with lots of ideas like Jeanne Lee only she sounds like Nora McCarthy! And the lyrics, yes the words are hers and we dig!

The program goes from strength to strength. Now if that sounds good you owe it to yourself to get this one and listen closely! The world and this trio are ready each for the other right now! Start the melding together by getting this album. May thay make many more.

Posted by Grego Applegate Edwards at 6:55 AM No comments: