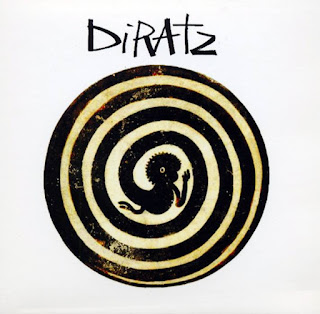 In the interest of full disclosure, Carla Diratz is a Social Media friend of mine. Maybe we both share a sort of poetic nature? All that translates into the fact that I was happily sent the new Diratz (New House Music 3) album to hear. I might not have in other circumstances. Whether I knew Carla or not I would have come on here with my thoughts either way. Because this album gets to me musically where I live. One of the places, anyway.

Carla gives us her underground, world-weary vocals, which are just right for the songs we hear. The band consists of Carla plus Dave Newhouse on keys and reeds, and Bret H. Hart on electric guitar and electronics, plus a fair number of guests as called for. Carla co-wrote all the songs with either Bret or Dave.

You might hear a little Lydia Lunch or later Marianne Faithful or even Nico here. But then the songs virtually are of the caliber of a Jack Bruce or Steely Dan, or maybe even that other Carla...Bley in her "escalator" period? Or Weill and Brecht? Something in the attitude of all of that, yet itself more than the others. The songs  have lots of substance, in other words. And it is pretty moody stuff, which suits the band well. Keep in mind these are not commercially repetitive, jingley things. They are more through composed. When I was a songster at Dick James Music, if I had played this for my boss he would have given me that look. Because it ain't pop.

The instrumental parts are well thought out, Bret's guitar a definite superior element in the mix, and Dave's keys and winds give further character to it all. The arrangements are excellent and avant rockish, I guess you could say.

It is the experience of the whole that makes this special. And it stays in a place throughout that is better heard than described. Art song, avant directness, poetic strength, especially intent on finding a natural, unforced originality.

It is music any serious listener with a good ear will be drawn toward.

I do suggest if you are a lover of the new and art-ish that you owe yourself a serious listen to this. I for one am very glad it is out and I can hear it a lot going forward. You may be like me. I think.
Posted by Grego Applegate Edwards at 7:03 AM No comments: 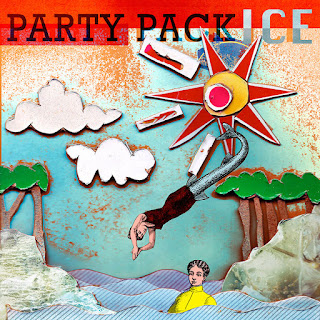 I've been far too silent on these pages. But that is going to end now. My life has been a tumbling barrel of chattering, hysterical monkeys but I am stopping the barrel in its tracks. That means I can resume posting more often. To inaugurate the new awakening, I cover today something you'd probably never hear about if I did not say something here and now.

It's a rather obscure EP CD by Party Pack. Ice (pF Mentum CD107) is the title. Now why should you care about something you've probably no idea about? It is in part the whole point of why I write about music. To pass on what turns me on in the hope that it will turn YOU on, that's always part of the aim.

Part Pack is a quintet of Adam Hopkins on bass (and the composer on this), Patrick Breiner and Eric Trudel on tenor saxes, Dustin Carlson on guitar, and Nathan Ellman Bell on drums. Maybe you do not know these names? The point of course is the music...if good, the names follow!

And this is good, very good indeed. It is psychedelic freedom jazz-rock, I guess you could say. It is loose but clear in direction. It has a rock aggression and an avant jazz heat.

And it just SOUNDS great. That is the point, right? It is one of those advanced underground things that motors the music forward. And because nobody else will buy it, it is your duty to support such things by doing so. I say that not to offend you. Artists like this NEED your support. And if you listen carefully, you will I think agree that it is music that deserves attention.

OK? Please.
Posted by Grego Applegate Edwards at 7:15 AM No comments: