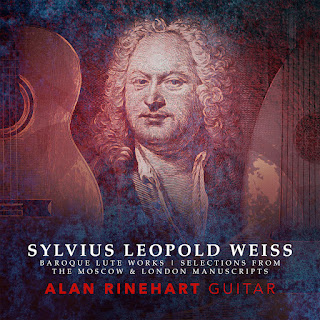 I learned in part by osmosis and the rest by listening--that Sylvius Leopold Weiss (1687-1750) was the king of Baroque lute compositions. I've enjoyed all that I have heard by the master and now happily there is a full volume of Weiss lute works played nicely and dedicatedly on guitar by Alan Rinehart (Ravello RR8056)

Of course there have been recordings of Weiss on guitar in the past. Here we have a full 70 minutes of a goodly assortment nicely played by Alan Rinehart. There is an "Allegro" in E Minor, a Fantasia, two multi-movement Partitas, the "Tombeau sur la Mort de M' Compte de Logy," a "Galanterie," "Menuet and Trio" and a "Suite in D Major." It is all worthwhile, inventive and nicely wrought in ways that make you appreciate the brilliance of technical and lyrical outflow. Maestro Rinehart is to be commended for his focused readings.

Anyone who gravitates to nicely thought-out Baroque sequences for guitar will find this one a continual pleasure to hear I have no doubt. Recommended warmly.

Posted by Grego Applegate Edwards at 9:57 AM No comments:

Dave Stryker, As We Are, Music for Guitar, Quartet and String Quartet 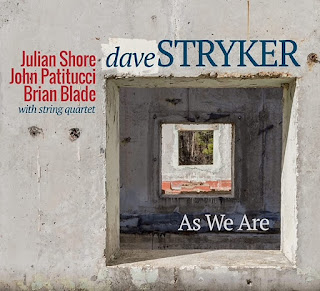 The idea of electric guitar Jazz with strings is hardly unheard of. When I was pretty new to Jazz listening I happily stumbled upon Wes Montgomery's classic album Tequila, which you may remember had tracks with a string backdrop arranged by Claus Ogerman. It was the antithesis of the pop tendency at the time to add strings as "sweetener." Not that it was not sweet exactly but the strings had plenty of contentful things to play behind Wes. I loved it. Still do.

Well when I started to listen to today's album I was happily reminded of that Wes gem without feeling that I was hearing a clone. Far from it. The album is guitarist Dave Stryker's new one As We Are (Strikezone Records 8822). It features Stryker with his Quartet of Julian Shore on piano, John Patitucci on bass and Brian Blade on drums, plus a string quartet. Julian Shore put together the arrangements, Stryker originals for the most part.

The compositions are weighty enough to stay with you, Dave's guitar revels in the way it can and does blend with the string sonarity, at the same time as his note choices are exceptionally nice to hear. There is a soulful countenance, lyrical sensibilities and harmonic movement of a satisfyingly sophisticated sort. The Shore scoring of the string quartet is rather brilliant I must say.

Stryker wanted the sort of strings-band interaction where nothing was superficial. And he gets that, very happily.

It is a damned fine album in every way. And if you are like me it will feel hearty and substantial, real art, a pleasure from beginning to end. Get this one!

Posted by Grego Applegate Edwards at 9:25 AM No comments: