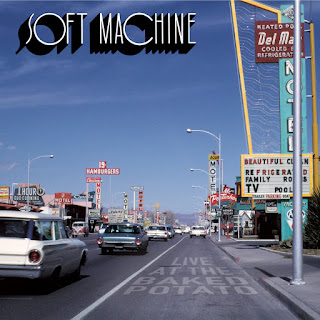 There seems little doubt about it, the legendary Soft Machine keeps going to attain a new peak with a reversion to their original name, a great line-up, a new studio album Hidden Details a while back and now this adventurous and cutting-edge live album on the heels of an extensive world tour. Live at the Baked Potato (MoonJune Records MJR 102) documents the band as it held forth at the Los Angeles institution on February 1st, 2019.

Power and flexibility mark the latest lineup, with John Etheridge on electric guitar, Theo Travis on sax, flute and Fender Rhodes piano, Roy Babbington on bass guitar and John Marshall on drums. What they do on this set is essentially revive again the adventurous spirit of the band as in its Prog-Jazz titan style of loose and tight in tandem.

The music addressed combines some old classics with a few pieces from the last album. A key to the straddling of old and new is the rare lucidity of Theo Travis on both keys and winds. In this way he can evoke Mike Ratledge's role along with the great sax roles too, from Elton Dean onwards.

So and very appropriately so the album starts off with a cosmic key adventure that recalls and rethinks the original Ratledge part to the opening of "Out-Bloody-Rageous" from the classic Soft Machine Third. It is a glorious thing to hear this new version which has just enough of the original feel but then keeps us thinking that this is NOW, after all.

So we get new and vivid versions of classics like "Kings & Queens," "The Man Who Waved at Trains" and "Hazard Profile."

Everyone sounds motivated,  filled with ideas and energy. The rhythm mates of Roy Babbington on bass guitar and John Marshall on drums are continually in the pocket with torque and drive. Travis is a vivid solo voice on sax and flute but as mentioned gives the band another avenue going forward on the Rhodes. Guitarist John Etheridge sounds as fluid and inspired as ever.

The whole of this album is a very happy thing. Any lover of Soft Machine will doubtless love this one. And anyone who by some chance are not familiar with the band and crave Prog adventure and improvisational flights will no doubt respond readily as well.

Posted by Grego Applegate Edwards at 5:59 AM No comments: