Morphine, Journey of Dreams, A Film By Mark Shuman, DVD 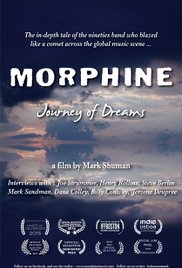 The band Morphine was that most rare of synergies, an outlandish combination of two-string slide bass, great vocals, baritone sax and drums and the musical genius of Mark Sandman to make it all work. Their brilliant, all-too-short existence is artfully and comprehensively documented on the Mark Shuman film and now DVD Morphine: Journey of Dreams (MVD Visual 93200) from the almost accidental beginnings to widespread critical and audience acclaim and the ever-difficult demands to obtain mass success that alternative bands were pressured into in the wake of the surprise mainstream presence of Nirvana.

The tragic death of Sandman and its aftermath is covered movingly. 40 minutes of additional interview footage adds depth to this DVD edition.

It is one of the smartest and well-paced rockumentaries I have ever seen. And as a fan of Morphine it gives me the full story for the first time. I recommend it to all similar fans and anyone interested in the rise of the alt scene.

Excellent!
Posted by Grego Applegate Edwards at 7:30 AM