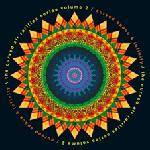 It's a reminder of the jam roots of the later '60s and in fact still sounds fresh and interesting.
Posted by Grego Applegate Edwards at 6:26 AM