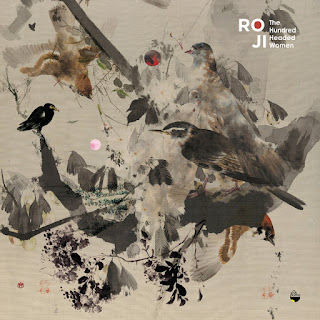 The duet-plus-guests configuration of ROJI, as we hear on The Hundred Headed Woman (ShhPuma 023) makes for a compelling and joyful noise thanks to the throughly musical avant timbre and tone of electric bassist Goncalo Almeida and the fully aware timbral depth and rolling creativity of drummer Jorg A. Schneider. The addition of Susana Santos Silva on trumpet for around half the album and baritone saxophonist Colin Webster for the other half fleshes out the sound without decreasing the very large presence of Almeida's bass or the rolling thunder of Schneider's drums.

In either case Silva's trumpet or Webster's baritone adds to the remarkable frenetics of ROJI without subtracting the hugeness of the duo in the least. Only one cut features the duo as duo. But we do not, or at least I do not feel anything but the rigor of electric-boosted continuity from first to last.

It sounds like Goncalo is playing a five- or six-string electric much of the time, as there is the deepness of the amped-up bass tones plus sometimes a counterline played in the upper range of the instrument, with or without a slide but in any event more guitar than bass-like. In either case Goncalo gives us a distinct avant fullness that is original as it is bracing.

The entire album rockets forth with great energy, noise, and timbre. It is as much psychedelic-laced rock as it is new thing and new music. And it is not just that they do this consistently but that they also do it so well.

In this extraordinarily fragile and frankly disturbing age we live in ROJI transcends the instability of the present with fearless musical courage.

And to me it signals the need to stop questioning an avant garde whose conviction that what they are doing is worthwhile and right comes at a time when many of these artists have little or nothing to gain from devoting a lifetime to evolving their sound. Fame they do not get. Money perhaps very little. There is sincerity and great talent in the best. You can hear that in ROJI. Celebrate a free world creativity! Get this album and play it!
Posted by Grego Applegate Edwards at 7:42 AM