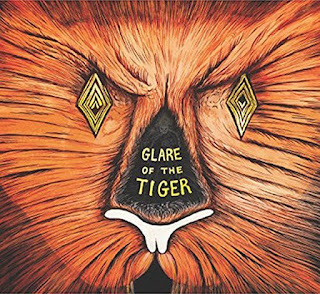 This is no place to talk about the crisis in American culture today. But certainly part of it is technological. I was finishing the last sentence on a review of the recording at hand yesterday when in three keystrokes (thanks to a permanent defect in my computer) I deleted the entire article and was unable to recover it. Bad enough that computers and the net helped destroy my entire career and in the end resulted in the loss of my home and most of what I owned. Now I do these blog post for free and my partner thinks I am a fool. That all is OK but I feel like rewriting this entire review over again from scratch like I feel like having open-heart surgery.

Alright then. What we have is a fusion-space band in the grand tradition of Miles classic electric bands and Herbie Hancock's Mwandishi. Now that Neo-Trad is just another style we can go back and reconsider the advances in avant electrics that were revolutionizing the jazz scene and at their best offered excitement, deep groove and freedom all in the same moment.

There have been some nice revisitations and rethinkings in recent years. Wadada's Yo Miles comes to mind among others. Now we have Adam Rudolph's Moving Pictures, a octet that forwards the classic electric spacerockfunk of earlier years and shows us there is still plenty of mileage left on the style, still things to be done to forward it into the future.

There is a sort of three dimensional structure that the band adapts and makes vividly alive. First there is the well-conceived rhythm team. Adam puts together an ensemble of hand drums to make his own "handrumset." His vital playing meshes very nicely with the drumset of Hamid Drake and the percussion of James Hurt. Then electric bassist Damon Banks melodizes the groove by acting as the foundational riffmaster.

All this plays off against electric guitarist-electrician Kenny Wessel's and keyboardist Alexis Marcelo's middle ground of solo and rhythmic essentials.

Finally the horn section of Graham Haynes on cornet, flugelhorn (and electronics) and Ralph M. Jones on reeds float atop with composed lines and solos that stretch the music and give it multiple tensile strengths.

Everyone works together to make this a music of soul, thoughtfulness and space travel. It's one of the most successful and originally launched fusion revamps I've heard, one of the best of the bunch. Take a listen!
Posted by Grego Applegate Edwards at 7:02 AM