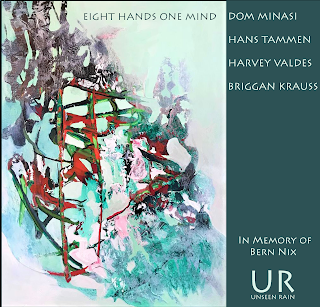 The Dom Minasi Guitar Quartet jumps ahead on their tribute to Bern Nix, guitarist with Ornette Coleman 1975-87 and then a key force on the New York improvisational scene until his untimely death in 2017. The album is appropriately titled Eight Hands One Mind (UR Unseen Rain Records).

The project came about when Dom Minasi put together some six compositions for four guitars in a kind of New Music Modern zone that required all four players idiomatically to realize the written parts while also as called upon to improvise freely in ways that rhythmically-harmonically fit the overall compositional framework. The original guitar line-up was Dom plus Hans Tammen, Harvey Valdes and Bern Nix. Rehearsals went well and then a final rehearsal was scheduled before the studio recording was to take place.  Sadly Bern Nix passed away before that could happen. Eventually the quartet was reconstituted with Briggan Krauss in place of Nix. And the music was finalized and performed as a fitting tribute to the brilliant guitarist, and at the same time a memorable New Music-Improv offering that Bern no doubt appreciated in those rehearsal days.

Listening to this one is a real pleasure--the compositions are intricate, detailed, advanced and filled with Modern openings outward in ways that seamlessly join fully interactive four-way compositional counterplay to free improvisations that in turn serve to extend the music's province while also bringing out the collective musical personalities of the players.

It surely is a triumph of bridging between New Music and Avant Improv. The musical content makes initial sense and intrigues on first hearing, then proceeds to grow ever more rewarding with repeated listens. Dom's compositions are outstanding examples of the synchrony of possibilities between to two domains, a series of exploratory gems that end up showing us a musically astute route between the compositionally profound and the spontaneously vital.

Kudos to all concerned. This is music that resonates in part with how Bern Nix thought of his guitar role, something akin to what he was hearing-playing in his head then. It is an album anyone interested in advanced guitar should listen to carefully but also some great music for anyone who follows the "serious" music scene. Either should find this a joy to hear. Bravo.

Posted by Grego Applegate Edwards at 10:07 AM