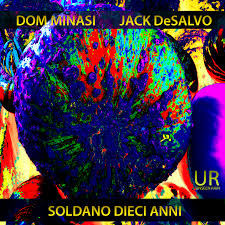 A two-guitar duet album with Dom Minasi and Jack DeSalvo? I was not sure what that would be until I put it on. Soldano Dieci Anni (Unseen Rain) is a hugely beautiful surprise. The both of them brought their acoustic-electrics, archtops, flattops and Jack a nylon string guitar. They let loose with some nicely done free numbers then proceeded to tackle their originals.

Fact is, Dom and Jack hit it off from the beginning. Their ability to swing and come up with great lines is heightened when the two play off against one another. The ravishing harmonies of the originals combine with inspired note choices for some of the nicest acoustic duets since side two of McLaughlin's My Goals Beyond.

They show deep roots, great subtlety, advanced interactions and the kind of spontaneity that an album like this demands.

Hats off to Dom and Jack! Bravo!

Posted by Grego Applegate Edwards at 8:24 AM