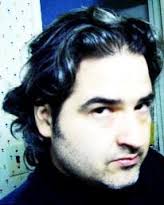 Jeffrey Hayden Shurdut has been one of the most incandescent and prolific of avant jazz recording artists in the last few decades. But lately I have not seen as many new releases coming out. The recent issue of an explosive live recording, Radiance, Glasslands 2010/2011 (self-released) makes up for the lack. It's the band letting loose with untrammeled energy and passion, with a presence of outside electricity in the person of Gene Moore on electric guitar, who adds some genuine fireworks, Jeffrey on a very boisterous alto, and a hugely thick barrage from Gene Janas on acoustic bass, Matt Luczak on drums, Dikko Faust on trombone, Pete Dragotta on baritone-flugel-pocket trumpet . . . and for the septet Shurdut, Moore, Janas, plus Marcus Cummins on alto and soprano, Brian Osborne on drums, Takuma Kanaiwah on musette, and Sam Englander on violin.

This is a very thorough blowout. The band makes a huge sound thanks especially to the amassed horns and Moore's rattling sustained feedback skronk on guitar.

This is one to clear your system with! It's off-the-wall all the way but in the best SORT of way. Whoo!
Posted by Grego Applegate Edwards at 6:28 AM