Color Me Obsessed: A Film About the Replacements, DVD 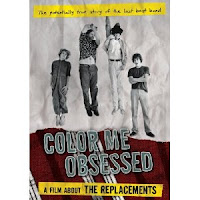 What is it about a rock band that can get the attention, devotion, even adulation of music fans, fellow musicians and important critics and yet have, comparatively speaking, a small commercial impact? Film maker Gordon Bechard asks this question about the Replacements on Color Me Obsessed (MVD 2-DVD 5533D). What emerges from the nearly two-hour film and many extras is a full picture of a moment in the rock underground.

All this without a single second of music or any interview footage or even images of the band. It is a kind of music reception history documentary. That it works fully is a testament to Bechard's vision and the extraordinary impact the Replacements had (have) on people.

In the process the story of the band's career from first demo to breakup is told in successive interviews from first-hand obsessors--those who were a part of the scene from producers and record execs to floor-level fans.

A picture emerges of four musically modest young men who somehow transcended their limitations at the same time as they succumbed to them--and in the course of their heyday captured in song and sound the alienation of people who don't quite fit in, who disfunction yet create a kind of art that has absolutely no pretensions to being art, and comes out of their dysfunctional stance.

It's one of the very best rockumentaries I have seen. You leave the film with clear feelings about why this band, why people in this generation needed the Replacements, why rock needs a band like this, with rawness, balls, yet very immediate sensitivity about the life around them, to regenerate the scene.