All the Labor, A DVD Documentary on The Gourds 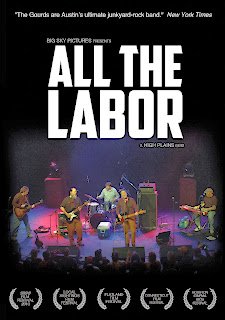 The story of the Austin, Texas, country rock group The Gourds is a story of a band that has spent considerably more than a decade together and has remained an underground thing. The fame of Nashville or top indie-alt billing is probably never to be theirs, yet they keep on. Fact is, they are too good for some music marketing channels today, maybe. The story is told well and exhaustively on the DVD film documentary All the Labor (MVD Visual 6044D). You get 96 minutes of the film, plus another 109 minutes of bonus, alts, extras.

There is a wealth of performance footage captured over different times in their history, some insightful narrative by the band members, and an overall look at the nonconformity and talent that make up the band. Suppose "The Band" started their career in 1999? In a way that is the fate of the Gourds. The music scene is no longer so open that rock and roots and talent can give you the sort of attention the Band got in their heyday.

But the Gourds seem unphased. They have multiple songwriters who are very good and keep producing. Their vocal mix is unparalleled. Musically they put together just what is needed for the songs--whether a folksy accordion, mandolin, ukulele, fiddle, electric and/or acoustic guitars, Fender bass, drums. They go from alt rock jamband hardness to yodelling country archaism in one set and they make it all seem like inevitability, though certainly none of it is.

They are funny, earthy guys and the love for what they do comes through strongly. It's a great story and it is told very well indeed. It may make you into a Gourds fan if you aren't already. So watch it and get that music in your head!