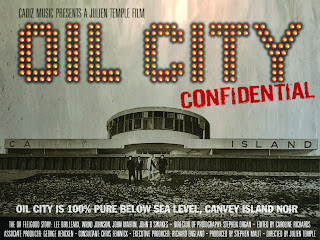 Canvey Island, England, a combination of industrial oil refineries, seedy coastal resort hovels and working-class neighborhood dwellings. It was and is the home for the roots rocking proto-punk band Dr. Feelgood. It forms an important backdrop for the story of the rise and fall of the band, as portrayed in the Julien Temple film Oil City Confidential (Cadiz DVD 125), now out on enhanced DVD with added interview footage.

What's really captivating about the film is the stunning footage of an industrial rust belt world, the life history of the band members growing up there, the articulate-funny candor of surviving band members and locals, perhaps especially guitarist Wilco Johnson, and the band performance footage integrated into the whole.

The group may not be remembered today so much but that is a mistake. They gave the British music scene a hard roots jolt and paved the way for groups like the Sex Pistols and Clash, but were a real power entity in their own right. The thing that grabs me about the film is that it brings a world alive in brilliant ways--even if you don't know or even don't think you care about the Dr. Feelgood history. It won't matter because in the end you will, but in the process you'll be subjected to documentary creative film making at its very best!