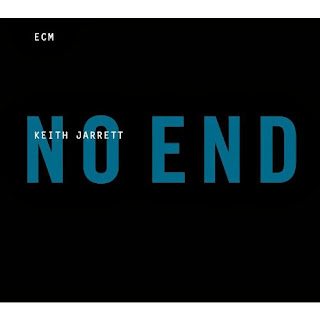 If you live long enough, you eventually experience some surprises, not all of them bad.

Who would have thought that Keith Jarrett laid down some sides in his home studio in 1986? But I don't mean solo piano sides. No. Sides where he is playing electric guitar, electric bass, drums, percussion, some background vocal chants and just a hint of keys now and then, all overdubbed for a group sound. This month it came out, as a two-CD set, with the title No End (ECM).

This is music you can well appreciate if you empty out of your head what Keith Jarrett is supposed to be all about. Because this is different. True he did a folk-rock album in the 1960s, but it wasn't like it changed the world. This one may not do that either, but it's very good. It's Jarrett as a kind of one-man jamband.

He manages to sound a little like Jerry Garcia on guitar, no kidding. The percussion has that ethnic feel like you used to hear him do in the quintet days. The drums are busy but also hip--almost like a Mickey Hart. The electric bass playing is right there where the style would suggest.

Now we aren't talking about songs here so much as a series of jam segments. And they work! It isn't what you'd expect at all, but it grooves and goes its way very nicely. Hey, would I lie to you? This is a very cool set--so long as you don't expect what Keith would ordinarily be up to. He has something to say here. And say he does.