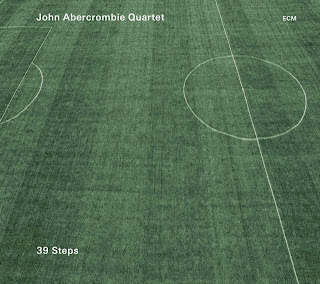 John Abercrombie is one of the small handful of highly influential innovators of jazz guitar in my lifetime. I think most anybody who knows the history of the present would agree to that. So his new quartet album 39 Steps (ECM) got my full attention when I put it on. This one is so cool, so quiet. At first it nearly put me off. But no, I had to listen more. With Marc Copland on piano, Drew Gress on acoustic bass and Joey Baron on drums, I knew I had to keep listening.

And as I did I started picking up on how hard they were swinging, and how hip John Abercrombie's line weaving was. Good lord! The rhythm team of Gress and Baron are doing it, but sooo quietly. And Copland solos like you know he can.

The tunes are nice, subtle but filled with turns and twists. Six are by John, two by Marc, one collective improv and a good stab at "Melancholy Baby," which goes way back for me because it was the first Billie Holiday side I ever heard, an old 78 my buddy brought out of his parent's attic and came over with when I was in 8th grade. So I still love to hear the tune and John's is no rote rendition, as of course follows without a need for concern.

This is an album of great chemistry. Copland and Abercrombie have played together since the '70s, as the press sheet reminds us, and there is a tight-knit dialog between them that shows. You forget as you listen that two harmonic instruments like the guitar and piano together can start clashing if they don't have an intuitive feel for each other's playing. These guys most certainly do. No clashes whatsoever--just the opposite.

And hey, Gress and Baron are so together here.

All I can say is that by the fifth hearing (as I write this) I am way past the surprise at the coolness. The music has wrapped itself around me more than a few times and I am in the middle with a big appreciation. Wow!