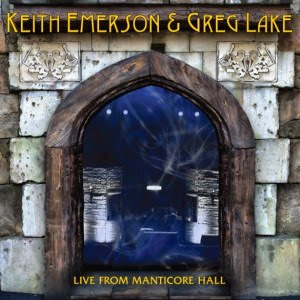 It may be patently obvious for those who know, but both Greg Lake and Keith Emerson have been seminal figures in the development of progressive rock. Greg Lake has been a stage-setter with his sterling vocal style, a bassist of impact, both as an original member of King Crimson and then of course as a key part of ELP. Keith Emerson did for the keys what Greg did for vocals, first with Nice and then with ELP.

And it was as much in the quality of their songwriting as in the sound they got. So when Palmer went his own way Keith and Greg teamed up as a duo. You can hear the fine results in Live from Manticore Hall (Manticore 001), which features many of their well-known songs arranged in a series of intimate remakes on this record. They are joined by a drummer for part of the proceedings. He sounds fine but gets no credit on the liners.

At any rate we get some of the best vintage material from the first few ELP albums, a remake of the King Crimson perennial "I Talk to the Wind" and some later material, too.

The versions differ from the originals most of the time by the more intimate retrospective mood that the concert revels in. "From the Beginning," "The Barbarian," "Take a Pebble," "Tarkus" and "Lucky Man" all sound very good. The latter tune finds Keith unearthing the original Moog from that first ELP record and giving us a remade retro sound that is good to hear.

Greg's voice is in very strong form, his bass and Keith's keys are right on. Anyone who grew up with this music will appreciate the new versions. Those who haven't can discover the music here as well. It may be a guilty pleasure these days, but I'll admit this music still appeals. Perhaps there were excesses in prog that led to a punk rebellion, and ELP sometimes overdid it towards the end of their reign. But the best is still exceptional. You can hear that in this concert.