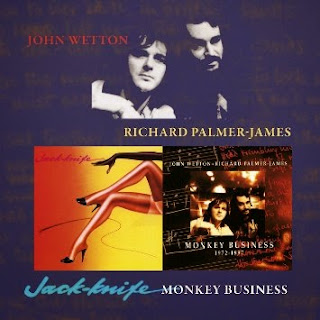 John Wetton came to my attention (and those who followed such things) as the replacement for departing bassist-vocalist Greg Lake during King Crimson's second phase. His vocals and songwriting, along with his bass playing, gave the band a second life much in keeping with the direction Fripp favored in those days. Later of course Wetton became a key member of UK and Asia.

Throughout the period and after has been a long association with lyricist-guitarist Richard Palmer-James, beginning from their schooldays in 1962 and continuing apace. We have some of the best fruits of that collaboration with two of their albums re-released and packaged as a special 2-CD set, namely Jack-knife (1978) and Monkey Business (1972-1997) (Primary Purpose 001).

Jack-knife is nothing to sneeze at, with its eclectic collection of blues classics done prog-style and originals. But the second album Monkey Business fascinates me a good deal more, a kind of scrapbook of demos, alternate versions and the songs King Crimson were working on when the band came to an abrupt halt, ending the second phase in 1974.

We get some excellent prog rock in various stages of completeness but all with a spark of immediacy, some music very familiar from Crimson (and UK and Asia), others not as much, but all fascinating. We get different versions of "Easy Money," "The Laughing Lake," "Starless," and much else besides.

This may not get to those not enamored with prog in its prime period, but for others it will be most memorable and absorbing.