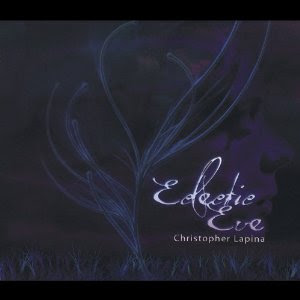 When you accidentally stumble across a review as you are trying to find cover art, it can be off-putting. I try not to be influenced. Unfortunately as I was scrolling through the net I brushed against some kind of review--that is, of the CD at hand this morning, Christopher Lapina's Eclectic Eve (self-released). It confidently put this music in the category "New Age." Well I've heard this CD five times now and it is NOT new age. It's instrumental, and it's not jazz exactly. It's composed, arranged with some amount of improvisation but not a lot.

Christopher Lapina plays various keys and wrote the music. He surrounds himself with various instrumental configurations, different with every piece. So it ranges from just Christopher to duos to choir with combo.

The music has occasional world music aspects. It's tonal, has a little of a rock inflection much of the time, features some very nice guitar solos now and again, and more besides.

The point though is that the music is rather good. There are no vapid banalities to lull the listener into catatonia. It is music to be listened to, with some amount of seriousness. But of course I suppose it could also serve as music to ignore music by, but it's too good for that.

Certainly interesting. Perhaps not extraordinarily profound. It may be a hip equivalent to the space-age bachelor music that is making its comeback. Or perhaps not?? Or maybe it's mellow jamband? I don't know. It has a slight veneer of the smooth but it isn't after that crowd either, I don't think. And it has spacey elements. You decide for yourself what it is. Or forget that game and just listen.
Posted by Grego Applegate Edwards at 5:16 AM