Moe, "What Happened to LA LAs?", 2012, Jamband Gets Distilled in Concentrated Song Form 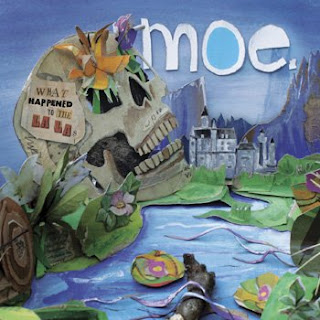 Any jamband the caliber of Moe rests much of its reputation on the extended live set. They are revered by their followers for the inspired appearances and where they take the audience. In the studio the audience and night-of-music expansiveness isn't a factor so much. It's a different challenge and not all jambands have been able to capture the spark in such environs and translate it into a more compact form.

Moe has. They have on their latest LP What Happened to the LA LAs (Sugar Hill 4080). It's a collection of very solid songs, played with the energy and excitement of their live act, but compressing the extended digressions and extensions that the live situation spawns. There's an abridgment, of necessity. When the jams hit, though they are a get-in-and-get-out-quickly affair, they DO hit the right spots before driving back to the songs.

It works because they are hitting it hard and there is a tight-looseness to the feel of the band that comes out of long togetherness and marathon touring.

Nice music, good tough-tensiled tracks, nice audio presence...this is Moe at their best.
Posted by Grego Applegate Edwards at 5:18 AM