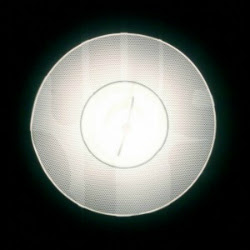 It is interesting to trace the advent of drone and trance in modern music through the initial influence of Indian music on the psychedelic electrics of the classic late-'60s. From that has come many things, and the "soundscape" today is one of them. This is not the place to name the particulars, but it does serve to introduce today's musical selection.

We have guitarist Ben Greenberg as Hubble and his 40-minute album Hubble Drums (Northern Spy CD or LP). Don't let the title fool you. This has nothing really to do with drumming (though some electric drums can be heard in the mix on occasion) and everything to do with electronic drones and guitar.

Ben has been the guitarist with Zs and Pygmy Shrews. For Hubble Drums he goes it alone. The music owes much to Fripp and Eno's landmark recordings of the '70s and what has been dubbed Frippertronics. Like their No Pussyfooting, Hubble Drums takes a trance-repetition-drone minimalistic soundscape approach. Where Fripp and Eno were spaciously sprawling, Hubble is more terse and busy. Most musical moments are filled with rather dense, noteful cycles of energy. The result is not as spaced as it is manic. The guitar work is well thought-through. Each piece relates to the others but simultaneously carves out a distinctive note cluster cycle and pace of its own. And there are times when classical psychedelic guitar leads come to dominate, in a repeated and chopped sort of way.

It's quite engaging music, consistently so. Shredmaster Greenberg has managed to come up with his own take on this kind of soundscape, with impressive results.

Northern Spy and Ben Greenberg have been kind enough to upload the track "Nude Ghost" for you to hear. Audition it at http://soundcloud.com/northernspyrecs/01-nude-ghost-hubble/.
Posted by Grego Applegate Edwards at 5:11 AM