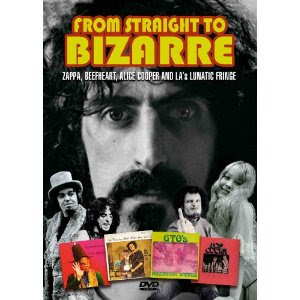 Frank Zappa with his business partner Herb Cohen embarked on an ambitious label venture in 1968. By the mid-early '70s it was gone. From Straight to Bizarre (Sexy Intellectual SIDVD 568) documents on DVD the story of the Straight and Bizarre labels, and the non-Mothers/Zappa releases that came out over the years of operation.

We get the story of the creative relations between Zappa and the artists, the music itself and its production, and the overall ethos of freakdom that the music in part represented. Essra Mohawk (Sandy Hurvitz), Wild Man Fischer, the GTOs, Alice Cooper and of course Captain Beefheart, among others, are discussed and what they did during this period.

There are talking head interviews of some of the key participants, commentary by selected critics, a cohesive narrative and selected music excerpts.

It's an important overview that is not perfect. There is less interview footage from Zappa himself than would be ideal, no commentary from Beefheart or Cooper, and perhaps less musical examples than one might want. The coverage of Captain Beefheart is not as comprehensive as his importance demands. Of course an entire DVD could easily focus on the Captain in his Straight Records phase, arguably his most seminal. Gary Lucus, guitarist and later Beefheart band member has been giving presentations on the life and importance of the Captain. And BBC has done an interesting documentary on Beefheart's entire career. So there is alternative coverage. On the other hand band members such as Drumbo (John French) have insightful things to say on the DVD about the living-creating situation of the band and how the music was put together during this period.

All-in-all one is left with a vivid picture of the commonalities the artists shared as part of the Zappa orbit and some of the wonderful music that was made--as well as some oddities that were more important as socio-cultural documentations of the freak scene.

It's a good introduction to the subject--entertaining, informative, and fascinating. It may not be perfect but it will no doubt be well-received by the Zappa aficionado and anyone with an interest in the counter-culture and music of the era.
Posted by Grego Applegate Edwards at 6:43 AM