Bryan and the Haggards, "Still Alive and Kicking Down the Walls" 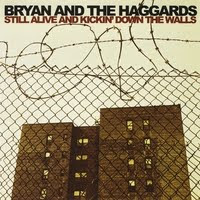 My sort of "are you kidding" initial response to the first Bryan and the Haggards CD quickly gave way to an appreciation of how one can make good music out of cross-referencing almost any style or influence if it is done with honest conviction. So we have a second CD of Merle Haggard cover avantia, Still Alive and Kicking Down the Walls (Hot Cup 111).

OK so how does this work? They take Haggard tunes and play them somewhat straight, then do solos that get pretty out the window sometimes. Simple. But refreshing as hell.

With the returning debate stemming around "jazz" or whatever word there is to call it as fundamentally a black music Bryan and the Haggards go their own way without much reference to that. I say fine. If they want to do Haggard covers, why not? This might not be "great black music". It in fact is music, and you take or leave it.

I take it. For those who feel instinctively the need to incorporate any old thing they please into their music, for those who break stated or unstated rules, I say let them. We don't need to censor the musicians out there from the music side. There will be plenty of that from extra-musical sources. We need to respect the artistic integrity of the players out there, respect whatever roots they choose to be an extension of, and loosen up a little. The music is what is played today. Accept it, reject it, but it's here one way or another. In this case, we have something very different and if it works, it works. It works, it works. . .
Posted by Grego Applegate Edwards at 5:23 AM

Labels: bryan and the haggards' "still alive and kicking down the walls" gapplegate guitar review, country-avant-jazz