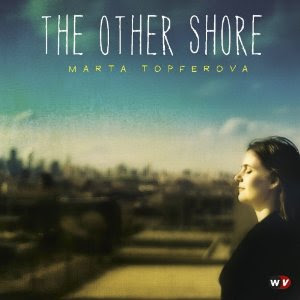 Folk and folk-rock, singer songwriters and song stylings, they seem to be resurging. Perhaps it is no wonder since the song form and good songwriting remain an important aspect of the music of our world today. If for a time it seemed that there were too few good songwriters, it was not necessarily so. They were not encouraged as much as they might have been. They were underground. They lived in rooms perfecting their craft.

Marta Topferova has been one of them. She scuttled back and forth between her native Czech homeland and the Spanish-speaking Americas. Her songs were not sung in English, which meant that many in the English speaking world did not hear her music. Her new album is her first collection of songs sung in English. The Other Shore (World Village) gives you an assortment of music, some wonderfully wistful songs sung by Marta in her own way, accompanied by her infectiously rhythmic strumming and an assortment of hand-picked sidemen who come through with some very nice backgrounds.

Well now, what else to say? Her songs are filled with the wonder and sometimes anguish of living life in the world. Seasons, nature, love, feelings, remembering, all get poetic and melodically interesting treatment. This Marta is rather excellent. Wonderfully evocative songs, nicely arranged, well sung. What more? I hope this is but the first in a string of such albums. We need the songs. We need the good feelings she gives us.
Posted by Grego Applegate Edwards at 5:34 AM