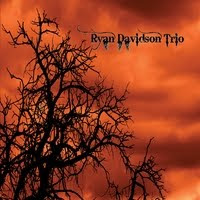 Ryan Davidson shows on his latest release, a self-titled trio offering [Ryan Davidson Trio (self-released)], that he can take an often fairly hard-edged electric sound, a solid trio with Ryan Hagler (bass) and Ryan Jacobi (drums), and a varied mix of standards and originals and go someplace interesting.

There are moments when you feel the sound influences of Scofield-Frisell-Abercrombie-Lucas, true. But he puts together a well-heeled and expressively controlled performance throughout. He's creative, he carefully crafts a meld of sound and substance, and he builds solos that maintain interest with a very musical sense. There are jazz-rockers, spacey ballads, and swinging scorchers. He is well rounded in technique and can do some multi-finger picking when called for, chord subtly, get good lines off and rock out convincingly and creatively. And he gets sounds that are on the verge of Davidsonian ownership.

Here's a guitarist to savor. May he continue to grow, gig, record and live the musical life!
Posted by Grego Applegate Edwards at 5:03 AM