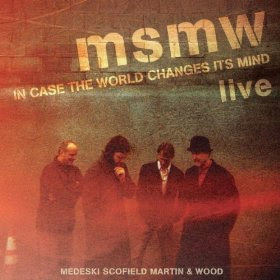 The idea of teaming Medeski, Martin and Wood with John Scofield is a good one. All four have a way of swinging the funk, of extended and expanding it with their ability to work outside of the box when they feel the spirit. And they do that well on the two-CD set In Case the World Changes its Mind (Indirecto).

It's the foursome (Scofield, guitar, Medeski, organ and keys, Martin, drums, and Wood, basses), live and kicking it for an extended set. They knock down the funk and stretch it out in ways for which they are well known. Perhaps there are not a great deal of surprises here but they do what they do very well and they can groove and solo tight or loose, in or a little out. And that's what they do.

Scofield of course is a monster on the guitar. He can do lots of things in lots of style niches but here he unleashes his expanded blues-funk, as does John Medeski, another monster when he feels it. The rhythm team bounces out of the four-square formulas as they see fit, or stays in the pocket when that seems right.

This is an nicely lengthy program and you'll get plenty to like if you grab it. If you want the outside leaning funk, this is it!
Posted by Grego Applegate Edwards at 5:22 AM