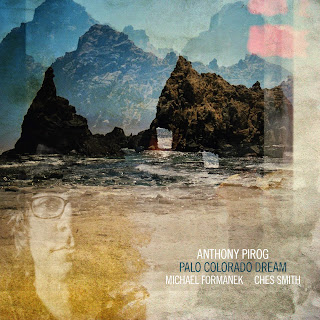 Guitarist Anthony Pirog has been breaking it up around Washington DC for a number of years and now finally he has a debut album, Palo Colorado Dream (Cuneiform). It joins Anthony with a heavily talented trio that includes Michael Formanek on acoustic bass and Ches Smith on drums in a program of advanced avant jazz-rock that more than holds its own. In fact each listen confirms and expands one's sense of accomplishment.

It's music high on composed content, with intricate finger work, looping acumen, and some full-out rocking in a controlled, well-paced sequence. You may hear a little Holdsworth there as precedent, but it goes well beyond that into a Pirog zone. There is smart notefulness, a rock-sustain guitar sound when needed and some really excellent trio work from the three together. There's a touch of alternate avant rocking here (some scronk done with a relish) and a complete lack of cliche.

You may know him as part of the two-member Janel & Anthony, whose work is covered here very favorably (type the name in the search box).

This shows us the full artist, guitar wizard, music tunesmith of power and depth. It's a beautiful record. I hope Anthony Pirog can give us lots more in the coming years. He promises as much as he delivers!