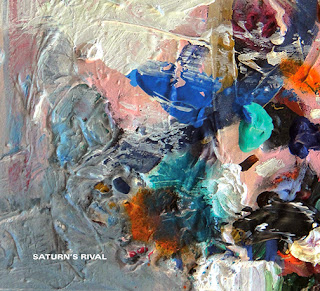 Who, or what is Saturn's Rival (pfMentum 079)? It is a collective improvisational quintet who in their recent self-titled album give us a distinctive slant on free, open-form music. The group makes much of the color contrasts naturally inherent in the instrumentation. Maxwell Gualtieri is on acoustic and sometimes very electric guitar, Susan Allen on harp, Richard Valitutto on piano, Ryan Parrish on winds and Anjilla Piazza on percussion.

The sound color of the mix foregrounds in this series of four improvisations. The "string trio" of piano (including prepared and inside-the-piano approaches), harp and guitar (played in both conventional and unconventional ways) contrasts with sax and flute. The percussion plays in part a kind of mediating role between the two sections.

It is music that straddles "free jazz" and new music improvisation, with an open sound and a creative knack of making significant statements in various combinations and groupings.

The quintet realizes music of dynamic ebb and flow. There is an episodic structure to it all, a kind of free narrative that holds together with an inner logic of expression born of close listening and unhesitant resolution.

More than that? They make music that works on many levels. It is avant atmospherics of the sort that makes for an absorbing listen. Hear this if you can!