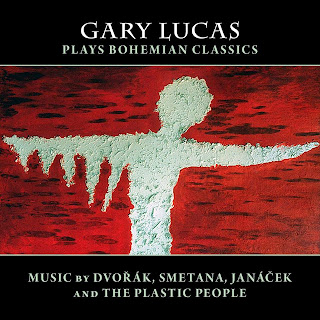 When it comes to guitarists alive and very well today Gary Lucas is one of those very rare beings whose sound is recognizable, or rather sounds are recognizable with a single note. He has captured his identity fully on acoustic, resonator and electric. You can hear his way very strongly on an album that came out a while ago on an obscure 12" vinyl release but which is now very much available in all formats on Rare Lumiere Records.

I speak of Gary Lucas Plays Bohemian Classics, which I have been listening to happily over the last few weeks. "Bohemia" for those thinking only of hipster lifestyle refers to that Czech land bordered by Poland, Moravia, Germany and Austria. So we have musical classics from that area of Middle Europe, done by Gary on solo Gibson acoustic and also his resonator guitar.

What forms the centerpiece of it all is a complete adaptation of Dvorak's "New World Symphony" (Sym. No. 9), including of course the "Going Home" movement. But then we get Janacek's interlude from his "Cunning Little Vixen" opera and Smetana's principal theme from the "Moldau." Rounding out the disk we also get some wonderful electric psychedelia atmospherics by Gary with the Plastic People of the Universe and with Urfaust.

The music speaks for itself as a very Lucasian occasion. Gary manages through picking, strumming and sliding with various tunings to capture the essence of these beautiful classics in a way only he can do. It is a triumph of creative thinking and his brilliance as a guitarist to convey to us the complex orchestral scores with shall we say a minimum of means. At the same time the very idiomatic Lucas guitar sound and style come through. His resonator work sometimes sounds almost banjo-like, his Gibson both wiry and full. Then the two electric cuts bring out the other side of Gary, the wizard of electric sound.

If you don't know the classical pieces (but surely you will know some at least of the Dvorak) not to worry, because the music is strong and Gary Lucas brings you all you need to hear of them to appreciate them. If you do, like me, know the music then you will dig how he has captured it all the more.

This may be an unexpected offering but it is no less captivating and brilliant for it. It is Gary Lucas at his very best.

Do not miss it, you guitarists out there. And everyone else, too! I mean that. It is a beautiful listen.