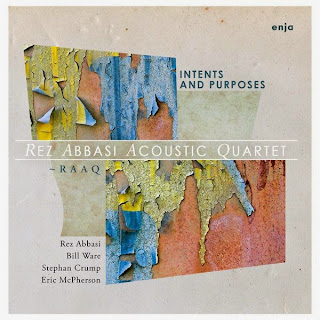 It may be a truism to say that some artists, when they are on a roll, can play almost anything and make it sound great. And of course it isn't entirely true. But for all that guitarist Rez Abbasi seems to be in that moment. He got the idea to do an album with his Acoustic Quartet (with Bill Ware on vibes, Stephan Crump on acoustic bass and Eric McPherson on drums) of old fusion/jazz-rock worthies in an acoustic setting. Now that isn't necessarily a bad idea, but it could also not be good if it doesn't come off. No worries, though. Intents and Purposes (Enja 9621-2), the album in question, comes off superbly.

There aren't so many guitarists who can play electric or acoustic guitar with equal impact. Gary Lucas is certainly one. John McLaughlin of course. Django. But add to that Rez Abbasi. He sounds like no one else on acoustic, with a number of different tones, all of which perhaps have something to do with his South Asian heritage and its incredible string legacy. But no, that is no guarantee that somebody who hails from there can just pick up an acoustic and, voila! There is an artistry Rez has that has enabled him to get a beautiful singing tone out of the unamplified instrument, and then make some extraordinarily original music via his own sense of note choice and velocity.

That is what is going on consistently on Intents and Purposes. The choice of music works because of the artistry of Rez and the band. But the songs are good choices, too. We get some vintage electric Zawinul, Hancock, Corea, Williams, Coryell done with love and attention. The album brings out the melodic-harmonic sophistication of these tunes without the amplification. And so you hear them anew.

RAAQ is a group that has grown into an interactive singularity. All four are mutually attuned, so that the doing makes a very poignant something of it all.

Intents and Purposes works on just about any level you could think of. It is some seminal music. And most of all it reminds us how Rez Abbasi has arrived as one of the supreme guitar artists of our time. Needless to say you have to hear this.