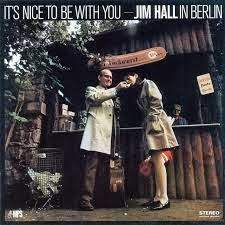 Jim Hall in some ways resembles Bill Evans. An uncritical ear may at first miss what is exceptional in his playing, because strictly surface-wise it all "sounds nice." In my early years of listening to much strident and heavy music and its association with my generation and outlook, I associated "nice" with my father's era and for a time missed some of the more subtle players. Not for years, but then.

Jim Hall's guitar playing is a special thing. Yes it is often quiet and harmonically pleasant. But then you start to get what's going on underneath the surface. That's true of the welcome reissue of It's Nice to Be with You, Jim Hall in Berlin (MPS 0209730) the first in what I hope are many rounds of MPS reissues. This one incredibly was only his second solo release at the time. There were far more later. Nonetheless it goes some way in reminding those now and then of the real artistry of his electric guitar style.

The premises are straightforward: Jim and his electric guitar by itself (overdubbed for harmony and lead parts) and Jim with a good trio of Jimmy Woode on bass and Daniel Humair, drums. They cover three Hall originals, some standards and the pop hit of the time "Up, Up and Away."

The subtle mastery of Hall is very much out front; beautifully singular voicings and very inventive line weaving are the order of the day. And that special soft sound.

It is a treasure of guitar sublimity. But that was Jim on most occasions. It is great to have this out again. I don't remember seeing this at record shops in the States then, so it is doubly good to have it readily available now. Jim was one of the greats. He shows us why here.