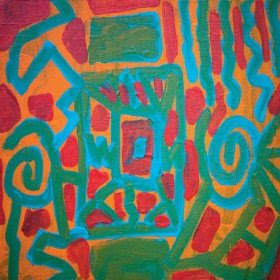 Can't say as I've heard nylon-stringed guitarist Benji Kaplan before I heard the release at hand today. Now that I have I shall not forget the name. Meditacoes no Violao (Circo Mistico Productions) is a full CD of his solo guitar work. He is a NYC native who became enamored with the music of the middle east, Africa and Brazil, began playing the nylon stringed classical guitar at an early age, spent time in Brazil studying the music with local masters, and then returned to the US, getting his BFA in jazz and contemporary music from the New School. Since then he has performed and sung with his own band and, as on this record, as a solo guitarist.

Meditacoes shows you how far he has come. It's a rather brilliant set of improvisations and compositions that he put together showing how he has taken on Brazilian classical and jazz-bossa-samba guitar and made it his own. He has impressive touch and feel on the guitar and his music is pretty darned ravishing. It's a guitar album guitarists will totally grok. And guitar fans will get equal pleasure.

This guy is GOOD. Hear this one!
Posted by Grego Applegate Edwards at 6:00 AM