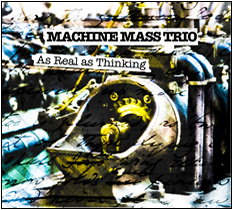 Belgian guitarist Michel Delville got together with fellow DouBt member drummer Tony Bianco to work on an offshoot project. They eventually brought in Belgian tenor man Jordi Grognard to form the Machine Mass Trio. As Real as Thinking (MoonJune 041) is the initial result, and it is a highly charged small-group rock-fuse opus that crackles with electricity. Delville, who also wields his jazz-rock pyrotechnics with The Wrong Object, stands out on this set with a brash metallic outward thrust much of the time. Jordi plays some expanded tenor in a sort of post-Leibman mode and gets some nicely spacey sounds on flute and snaky bass clarinet as well. Drummer Tony Bianco rocks with fusionoid virtuosity and takes an out-free path when needed.

There are torrid advanced out-rockers, some droning psychedelics, riff-based funkers with long floating melodies that owe something to Soft Machine and Weather Report, and some off-in-space segments where they take it out.

All-in-all it's another good spin on the genre of electric jazz-rock as evolved out of classic Soft Machine, Mothers and other innovators of the initial flowering of the music. It is first and foremost a group sound and a conceptual-compositional vehicle situation. Though compositions work to establish the mood of each number, yet it is what's put on top of it that often holds the most interest. Individual solos are there as needed and both Delville and Grognard come through singly as warranted, but it can be a matter of a three-way collective improvisation as well. A high point is Delville's long, planet-spanning guitar solo on "Falling Up."

It is a nicely turned set. It's a nicely wrought contribution to the music.
Posted by Grego Applegate Edwards at 4:46 AM