Katie Pearlman, "Girls Like Us," New Album From A Strong Singer-Songwriter 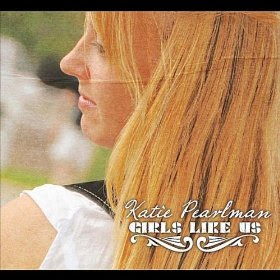 I've reviewed a number of vocalist Katie Pearlman's previous albums. Alas they were posted on the www.gapplegate.com site which I had to take down several months ago and was not able to salvage the reviews that had not been transferred over to here. That site will be resurrected shortly for my own music, but in the meantime Katie is back with a new one, Girls Like Us (Self-released KP-004). It's a good follow-up on the previous efforts, one of her very strongest. By the way, think of the title as "Girls Like US," not "Girls LIKE Us," OK? Different meaning there.

She's been a drummer-vocalist coming out of a jamband background and this I believe is the first album where she has switched over to rhythm acoustic guitar and given the drumming assignment to someone else for now. It's clear that she's concentrated on her songwriting, but there is a residual country-Dead feel to some of the music, though this album does not center on jams. Katie's vocals are very much her own. There's a hint of Edie Brickell, some of the blue-eyed soul qualities of Tracy Nelson, and otherwise it's Katie. The songs are very much to the point as well. These are some of her very strongest. Lyrics tend to be personal-autobiographical a la Joni Mitchell, and that's a dimension that brings her as a fully human-musical being before our ears.

This is really attractive music by a vocalist-songwriter that deserves your support. These are real songs sung really well. Welcome back Katie!
Posted by Grego Applegate Edwards at 5:14 AM