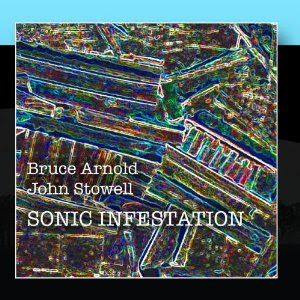 Today a look at the last of the series of CDs by guitarist Bruce Arnold that we have been covering (see previous posts), namely, Bruce Arnold and John Stowell's Sonic Infestation (Muse Eek 149). The album is subtitled "Electroacoustic Guitar Improvisations," and that is what we have here. These are a series of multilayered, acoustically manipulated duets for acoustic and/or electric guitars.

Sonic Infestations finds common ground in the musical space between players like John McLaughlin and Ralph Towner without actually straying on the usual turf of either artist. There are 11 fairly short sequences that total in an EP-lengthed playing time of 33-odd minutes. The electroacoustic manipulation often provides a third voice-texture via its interesting transformation of guitar sounds.

In the end this is an always-captivating venture into improvisational and transformational brightness. Arnold and Stowell play interesting dual improvisations and the electroacoustics complement the stringed immediacy with a dimensional depth that I find quite appealing. It is a good listen.
Posted by Grego Applegate Edwards at 5:38 AM