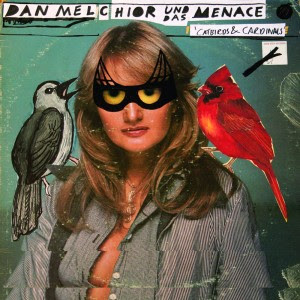 OK, what have we here? It's something rather odd, I must say. Dan Melchior und das Menace have put together on Catbirds and Cardinals (Northern-Spy 011) a rather bizarre album of off-kilter would-be pop-rock. They have hooks, most of the time. They have a retro sort of faux psychedelics-for-the-radio sound. The lyrics are off the wall as much as anything. "Drama Queens on Prozac," for example, as you can gather from the title.

It's very well done but also very low-fi. It sounds like it's playing through an old transistor radio, partially because it was either tracked, mixed or mastered at such a hot level that distortion is a factor.

Other than that, it is very cool stuff.
Posted by Grego Applegate Edwards at 5:51 AM