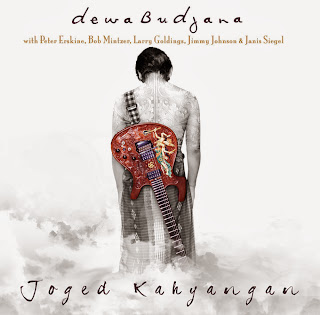 Indonesian guitarist Dewa Budjana is back with his second album for MoonJune Records, Joged Kahyangan (MoonJune 059). He's made some very many albums with pop-rock group Gigi, which have sold well internationally, but as a solo artist he's more into jazz-rock fusion sounds. This latest album gives us nice, somewhat on the mellow side tunes, some excellent playing by Dewa and a band of heavies--Larry Goldings, Bob Mintzer, Jimmy Johnson, Peter Erskine, and singer Janis Siegel for a track.

What I like about this one is the subtle integration of Indonesian elements and what Dewa lays down on guitar in the midst of it all. He has a great tone and a rhythmic sense that sets him apart. It makes for very pleasing listening.

I hear his next will be a power trio outing. I look forward to that. Meanwhile this is quite nice.