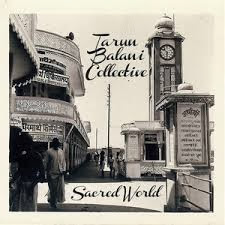 Some fusion/prog from Mumbai, India? Mumbai (formerly named Bombay) is a city with a rich musical heritage, of course, but we don't get much in the way of jazz/prog over here from there. Here's one that's very good. We have the Tarun Balani Collective doing Sacred World (self-released).

Tarun plays the drums with flair and wrote all the compositions. Sharik Hasan plays a central role as pianist, with much of the key compositional elements getting foundation in what he does, but then he voices and solos nicely too. Aditya Balani plays electric and acoustic guitar, and sometimes you can detect a touch of Metheny/early Abercrombie there. He's good and takes it his own way. Bruno Reberg plays contrabass and does a fine job anchoring it all. He also takes some nice solos with a woodiness that is cool. And then there is Suhail Yusuf Khan on Sarangi and vocals--it sounds like he is playing with a plectrum rather than a bow sometimes but it's very good.

So put all of this together and you have distinctive South Asian jazz-rock-prog-fusion that does not sound like what you'd expect and that does not matter because it has its own way. It's lyrical, it moves. Well done!

Posted by Grego Applegate Edwards at 6:58 AM