Mike Keneally, You Must Be This Tall 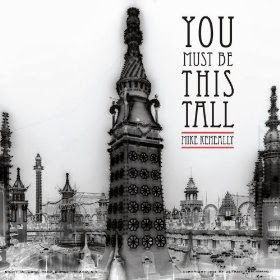 The term "progressive rock" in some ways became as unwelcome in the '70s as that of "cool jazz" in the '50s. Sure, in both cases the music sometimes suffered from excesses and the reaction against it with "punk" and "hard bop" was predictable and perhaps inevitable. Nonetheless there was plenty there in both cases of music that was totally valid, excellent, worth hearing still.

So if I tell you that Mike Keneally's album You Must Be This Tall (Exowax 2414) might be thought of as progressive rock today, you must not take that as to mean that you are in for some kind of pretentious synth version of the "1812 Overture" or something of that ilk.

It is complexly arranged compositional rock that takes the best of Zappa in his ambitious moments and groups like Yes and perhaps a hint of Pink Floyd's middle period . . . or at least it's music that has something in common with that, but made into a new something.

Keneally plays a very nice electric guitar along with acoustic, synths, bass and vocals. There are live drums much of the time played by Marco Minnemann. It's new advanced, "progressive" rock that rings true and does not at all play on nostalgia as much as builds a music on the foundations of the past.

Keneally is a guitarist with excellent taste and sound, a rock composer with a great sense. And the album fully satisfies a need for some hip complexity that always remains musical. So, there.