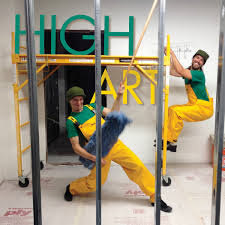 I like it when I am sent corkingly good yet totally unexpected musical combinations. I like to be rocked to my foundations as to what is supposed to go with what and I think it's good for us all to loosen up and see/hear all the possibilities that can be musically, which are infinite, never-ending.

So that's what dawned on me as I listened to The Living Earth Show and their album High Art (Innova 863). In a way the title is a commentary, an aside, because sure, this is "High Art" but it participates in some way with things that at one point were considered "Low Art", namely music that involves electric guitar and drums. Most of us by now have dismissed the high/low distinction. If it's good, it's not a matter of altitude, or it all is high, depending on how you look at it.

And the irony of the title also has to do with the fact that this duo is performing "new music", contemporary compositional music that you or I could easily file away under "modern classical" without any compunction, what is traditionally in the "High Art" camp.

That is all interesting and food for thought but it would not mean much if the music was uninteresting. And that is not so. It is very interesting. So who are these guys? It is Travis Andrews on electric guitar and Andy Meyerson on percussion, which means principally vibes, drums and hand percussion. They perform four different works (and one is performed in two different realizations) by the new sort of composers, people you may not be familiar with (or then again, you might). They are Samuel Carl Adams, Timo Andres, Adrian Knight, and Jon Russell.

Each work has its own sound world, from a slightly "Moon Child", semi-Fripp-like gentle work to soundscapes of great beauty, to heavy metal and anything goes. The artistry of the players is obvious and the compositions bring out a unique something that has been influenced by the spatial qualities of new music and its unfolding but also from the advanced rock realm as we've experienced it from the psychedelic era onwards.

Through the magic of overdubbing we may get vibes along with hand percussion and drums, for example, so the sound can be larger than a typical duo would suggest. In any case the music is really fetching, if you give it the time and space to unfold.

It will be manna for electric guitar fans and players, and the same goes for the percussion end. Most importantly it is music that sings in your head, sets up rarified moods, blows you away in different ways for every work.

I reviewed the album here rather than on the Classical-Modern site because I figure it can do the most deconstructive rethinking non-damage from this end. What is music? Here is one good answer. Listen to this one and you might start opening up even more than what is ordinary for the adventurous audience. I did. Opened up more, I mean.